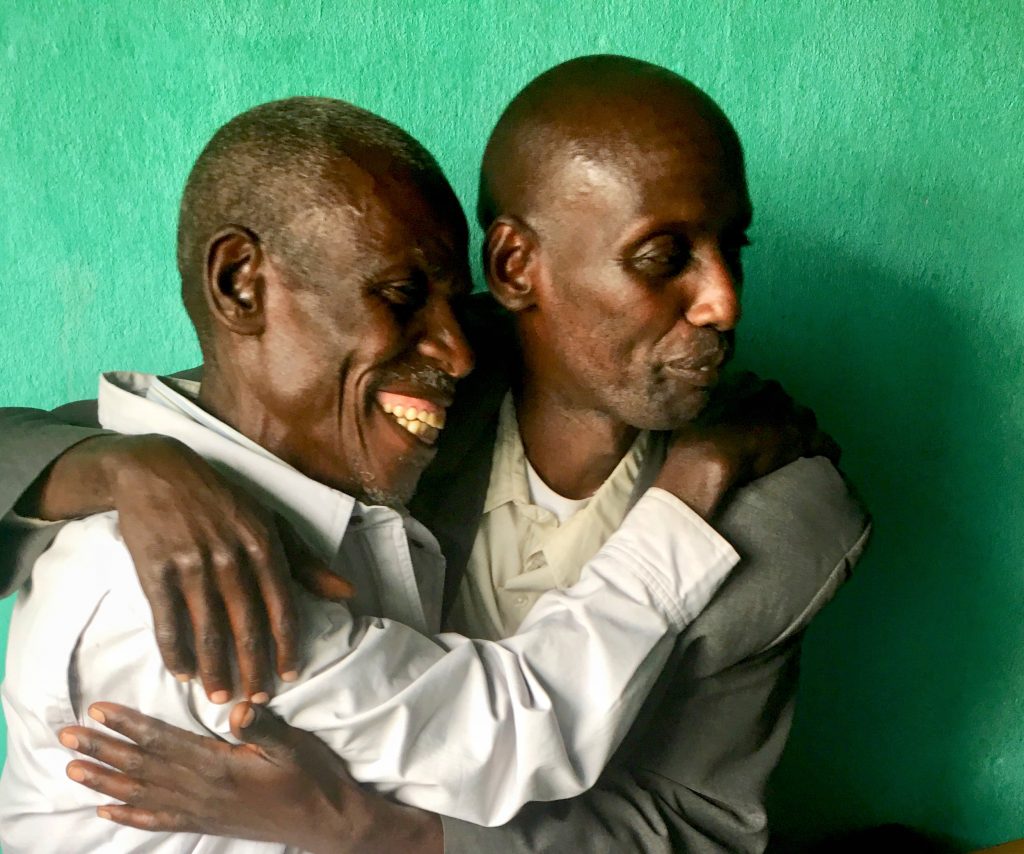 I don’t know what to do with Antoine and Patrice’s story. They urge me to spread it widely. To tell everyone about the deep friendship they now share. But it’s a difficult story. One that our human thinking cannot get its head around. Well, mine at least.

You see, during the genocide, Patrice was part of the group who hunted and killed 58 of Antoine’s immediate and extended family. Only two survived. He and one other. Since Patrice returned to the village, they have kept a wide berth from each other but Antoine shares freely that he spent much of his days planning revenge on the friend who had turned enemy. He wanted him punished like he had been punished. Deeply. Unmercifully. Publicly. And I understand all of these desires.

But in March 2017, the two men attended a reconciliation workshop. They had completed the formal government process many years ago. This had settled the pragmatics. But the heart, the heart of each man was dark with sadness, revenge and regret. Antoine talked about the enormous burden of unforgiveness. How this burden ties you to the other person. And diminishes your energy, your joy and your capacity. In the workshop, they heard about the history of their country. The myths and lies that had led to the genocide. They told their stories. Publicly and raw. They heard the stories of others.

At the end of those five days, Antoine and Patrice chose reconciliation. Antoine crossed the room, weeping tears he never thought he had, and told Patrice that he forgave him. He tells me, “I would have done this even if he had not asked. I could no longer carry this burden. I needed to be free.”

Tears run down Patrice’s face. He doesn’t try to stop them. He confirms, “I was an evil man. I had a heart of stone. Even after the courts, my heart was like stone. I could not feel his pain. But now. Now I cannot imagine that I have done these things. Now my heart is soft.” That’s why he doesn’t stop the tears. They are a beautiful reminder of a heart that’s come to life.

By the end of this conversation, I’m feeling traumatised. Is this truly possible? I almost want to say to Antoine, “You can’t do this. It’s not human. It’s not reasonable.” And it’s not. It’s divine. It’s an exchange of grace and love that defies the head and rational thinking. But as the two men throw their arms around each other, I know it’s real. It’s the most real act of forgiveness and reconciliation I’ll ever see. They tell me they’re best friends. And I believe them. That they’ve brought their families back together. I believe them. That they’ll work together to unite the hearts of their community. And I believe them.

It’s a different kind of love story. Much like the one about a man who hung from a cross. And it reminds me that this kind of grace and forgiveness is still possible.

One thought on “The cost and the freedom in forgiveness”