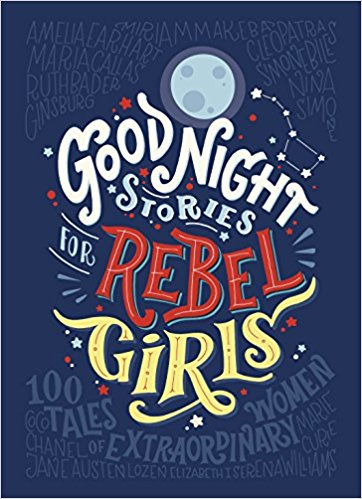 “To the rebel girls of the world:
You are the promise
You are the force
Don’t step back and everyone will move forward”

I am a big believer in the power of story to teach, and a current favourite in our house is the book Goodnight Stories for Rebel Girls.

Written with a delightful twist on fairy-tale conventions such as, “Once upon a time, a girl called Amelia saved enough money to buy a yellow aeroplane”, it has a familiar pattern that is easily accessible. Each page tells the story of an inspirational woman who overcame adversity to be who they are meant to be.

With beautiful illustrations and inspiring quotes from each woman included, this book features a number of women both dead and alive. Their fields of expertise are diverse, with politics, marine biology, and art being a small sample. But the wonderful thing is, each story opens my daughters’ eyes to the many forms of adversity in the world today.

With Amelia Earhart, Malala Yousafzai and Jane Austen being just a very small sample, it examines barriers of race, class and gender. It examines religious and cultural restrictions. It deals with the realities of poverty and conflict and it features a number of women who overcame disability to realise their dreams.

As I was driving to art class this morning, my daughter was once again telling me her favourites: the Haitian pirate Jacquotte Delahaye; the Mongolian Eagle Huntress was who the first woman of her people to train a Golden Eagle to hunt; and the English zoologist who as a young child took her pet crocodile to school.

She described it to me as “fairy tales with real women”, and through these true stories, my daughter is learning about resilience, perseverance, identity and adversity.

I am continually astounded by how many of these women are mentioned in our kitchen table conversations, but I no longer need to ask the question “Where did you hear about her?”

For the answer is always Goodnight Stories for Rebel girls.