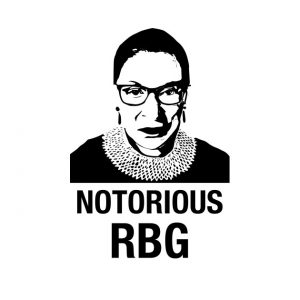 “I ask no favor for my sex, all I ask the brethren to take their feet off of their necks”

I was scrolling through Facebook and saw the trailer for the new documentary on Supreme Court Justice Ruth Bader Ginsberg — known as ‘Notorious RBG’. “What people might not realize is that Justice Ginsburg has been using that quiet voice of hers to shape the course of our nation’s history for more than six decades.”

“I ask no favor for my sex, all I ask the brethren to take their feet off of their necks”

Supreme Court Justice Ruth Bader Ginsburg was appointed to the Supreme Court in 1993. Being a leader in the area of Law, she fought deeply for the equity of all people based on race and gender. As a leader in law, she unmasked and uncovered gender inequality, discrimination and the challenge of women throughout the past six decades.

She was 1 of 9 women in Harvard Law and was told that it was ok, that she earned less than men. Even though she topped her law class, she struggled to find a job, because people did not want to hire a woman. These and other experiences started a career in working for strong anti-discrimination laws and fighting for equality for women. She refers to herself as a ‘flaming feminist litigator’.

She has often reflected upon her success was due to her own tenacity, the foundations of her mother and most importantly due to her supportive husband. Justice Ginsburg speaks fondly of her late husband, Rocky, noting that their marriage was of equality and support. Her late husband supported her throughout her career by ensuring that she had space and support to advance her career. He was quoted as saying:

“I think the most important thing I have done is enable Ruth to do what she has done.”

In her own right, she really has been a torch bearer for not only equal rights, but equal access and opportunity for women.

“Ginsburg was also wary of any laws that purported to shield women from the harsh world outside the home, such as rules barring women from jury service. As she wrote in her very first Supreme Court brief, for 1971’s Reed v. Reed, “The pedestal upon which women have been placed has all too often, upon closer inspection, been revealed as a cage.”

She has been known for her rousing and thought invoking dissents when conversative and regressive ideologies were put forth by colleagues. Using her voice, her status, her position to buck against trends of regression, in favor of progressive equality. Radical, albeit, necessary change of opinion.

She has a quiet demeanor, one which demands full attention when she is speaking. But the words which she speaks, are sharp. Clear. Concise.

She is a trailblazer not only in law, but for all women around the world.

The inspiration for this post, from 15 Things You Should Know About Ruth Bader Ginsberg