I’ve read so many motivational quotes that tell me it’s not about what happens to us, but our attitude to it that makes a difference. Sometimes these platitudes are like sand kicked in our face at the beach. They don’t breed contentment they breed a desire to slap someone — anyone.

So, how do I build attitudes that create more contentment in my life? 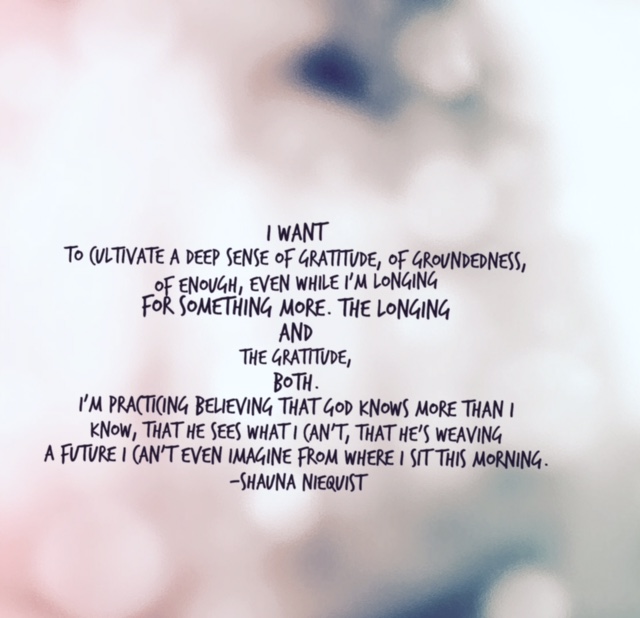 I’ve been thinking about how anticipation, faith and gratitude combine in a mix that somehow turns into contentment.

Gretchen Rubin in The Happiness Project says, ‘To eke out the most happiness from an experience, we must anticipate it, savor it as it unfolds, express happiness, and recall a happy memory.’

Anticipation is something that often remains in childhood. That feeling of waiting for a birthday, Christmas or the summer holidays seemed almost painful, but when the moment arrived the joy was palpable.

I remember smelling the grass in spring and anticipating softball season.

Warmth in the air and the promise of later sunsets made me think about long, lazy days at the beach, body boarding through the surf and the feeling of sun-baked, salty skin.

I lost anticipation and excitement for a while in the seriousness of being responsible, of having to work hard and putting myself last in long list of priorities.

Contentment is not about anticipating and expecting things will go exactly as we hoped. It’s about enjoying the moment. Learning a lesson. Accepting. Changing. Growing. Adapting.

I’m anticipating more travel next year. I’m not sure exactly where I will be going, but we travel for at least three months of the year, so I know it will be exciting.

While I anticipate going away, I anticipate more the fact that despite anything that could, and often does, go wrong in travel, we will have adventures and find things we never thought about beforehand.

The leap of joy that surprises and enchants us is ethereal and difficult to manufacture.

C.S. Lewis put it like this: It was more like when a man, after a long sleep, still lying motionless in bed, becomes aware that he is now awake.

Contentment in the everyday is heightened by anticipation. No matter what the circumstances, cultivating gratitude for today even while longing for what is to come will cause us to feel more content.

As we skid to the end of 2015 in a rush of To Do Lists and slide into 2016, I hope something deep in our souls is provoked or awoken.

I pray that we would be thankful and grateful even if 2015 has been unkind.

I wish you all anticipation for the New Year and that you will be surprised by joy.

I trust that you what you have is enough, even when you’re longing for something more.

I believe that God is weaving a future for each one of you that you can’t even imagine from where you sit this morning.